This is what we recommend :

Day 1: Arrive Tehran – Check-in to your hotel in the morning followed by time to explore Tehran.
(D)

Day 2: Kashan / Natanz / Isfahan – A full days drive takes us via historical towns of Kashan and Natanz before we reach Isfahan. (B)

Day 3: Isfahan – Isfahan is a place for savouring the high refinements of Persian culture and getting lost in its old bazaar. (B)

Day 4-5: Bakhtiari Nomad region / Shahr-e kord– At an elevation of 2061m Shahr-e kord is nestled between two mountain ranges and is really off the beaten track. An ideal way of meeting the local nomadic people of the region.(2B)

Day 6: Yasuj – The area of Yasuj has been settled since the early Bronze Age and is the place where Alexander III of Macedon stormed the Persian gates and fought their way into the Persian heartland. (B)

Day 7: Qashqai Nomad region / Shiraz – On our way to Shiraz we stop to visit a Qashqai settlement. These nomads are Iran’s largest group of nomadic pastoralists who travel with their flocks each year. (B)

Day 8: Persepolis & Shiraz – We will spend the day discovering the spectacular site of Persepolis and surrounding rock tombs. (B)

Day 9: Firuz Abad / Shiraz – Another excursion outside of Shiraz takes us to ancient city of Firuz Abad. Built in the 3rd century BC by the founder of the Sassanian Empire but today a Qasqai farming town, there are still a few remains of the old ruins to explore. (B)

Day 10: Tehran and Depart A morning flight to Tehran and you are free to depart. (B) 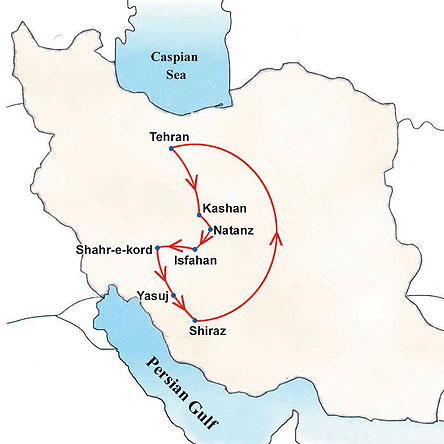