Home Island of Hormuz; the land of colored soils 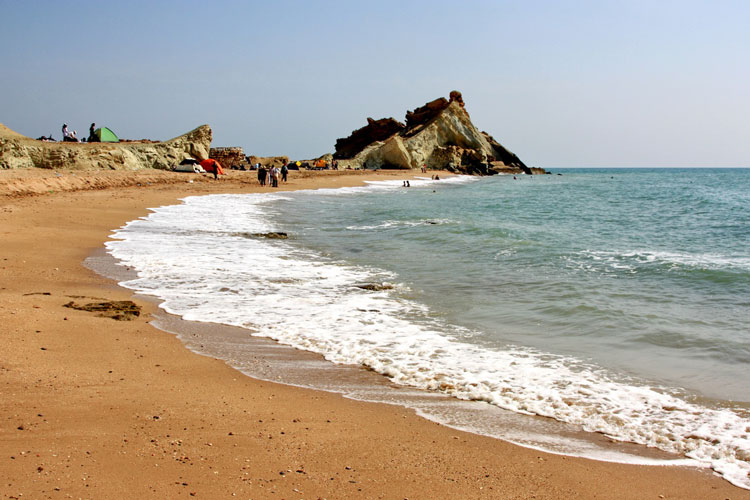 The island of Hormuz is 30 minutes away by boat, and the city of Hormozgan is in danger. When it reaches the coastal strip and the captain drives the motor boat into a mysterious silence, Hormuz is located in Hormozgan province and at the mouth of the Strait of Hormuz, and is basically a salt dome. Come along with you to get to know more about the island of Hormuz.

Hormuz is located 42 km2 in a distance of 8 km from Bandar Abbas. The existence of beautiful minerals and stones has dubbed geologists and geologists to the island.

The only settlement of this island is the small village of Hormoz, originally located among palm trees. The village has a mosque with yellow stones and a rugged dirt alleys that are rarely crowded. The ruins of the amazing Portuguese castle are located on the northern side of the island, and the rest of the island is 42 km2 from the island. The rugged and rugged grounds of the island’s interior, which have dried up over the course of centuries with the burning sun of the Persian Gulf, are by no means habitable. A half-day tour is the best way to see the historic and coastal texture of the island, which is the best time to start the tour in order to avoid the heat of the morning.

By the 14th century, this island was called Laron, and Hormoz was the name of a major commercial city along the Minab River. With the bloody attack of the Mongols, the fifteenth emir of Hormuz had to leave the city to save his life. With many people displaced from the city, he first moved to Kish Island and then moved to Laron. Due to the strategic location of the island, the new Hormois soon became an important hub of the island, attracting many immigrants from Hormozgan and further districts such as India and Africa. Visitors from Hormoz described it as rich, crowded, and luxurious. Since then, the island has been occupied by the Portuguese.

Eventually, the Portuguese were driven out by Safavid Shah Abbas in the early 17th Century and Shaabbas transferred the Trade Center to Port Gembron, which then inherited Bandar Abbas’s name from the king. Hormuz, whose trade center was stripped off, has been on its way for decades.

At 750 meters, the harbor of the island of Hormuz is a famous Portuguese castle. This castle is perhaps the largest colonial castle built in the history of Persia. Despite centuries of neglect in keeping the castle, which caused part of its walls to fall into the sea, still thick walls, rusty balls and grandeur have preserved the beauty of this castle. 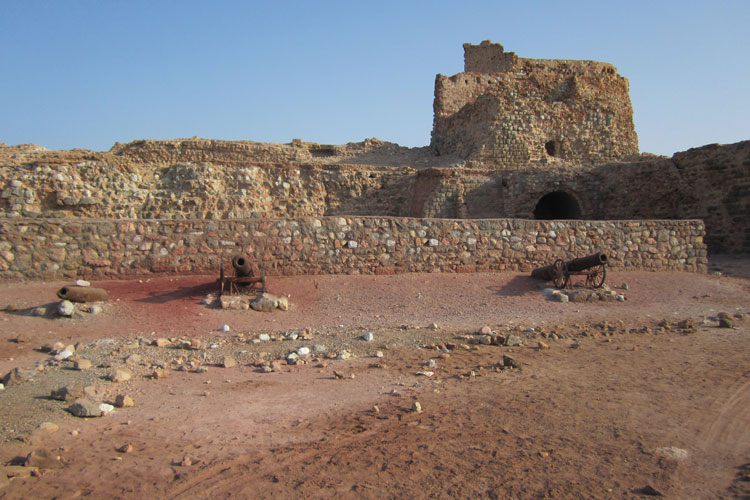 From the threshold of the enclosed fortress you cross into a vast courtyard. Just like being one of the weapons of the ancient covenant. In the middle of the courtyard of the underground church is a magnificent arched roof. You can visit the ground floor in front of the guard tower before you can follow the paths marked with rocks to reach the ramparts. 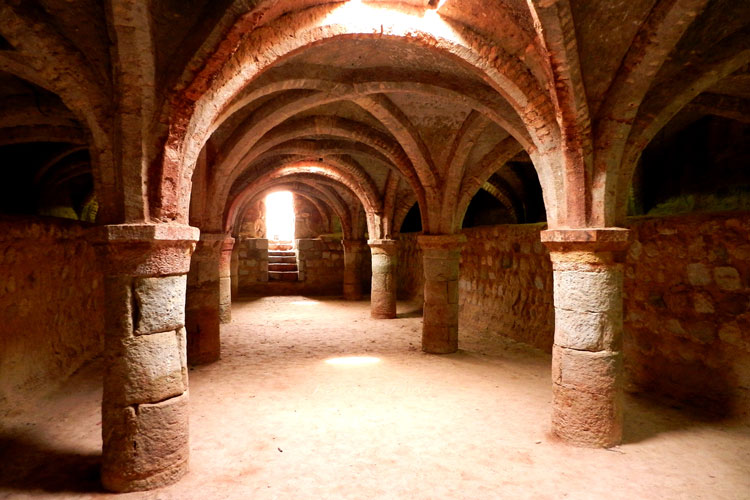 After the arrival of the Portuguese to the island of Hormuz, they first started building a church. The roof of the church was decorated with beautiful coral stones found on the island. The beautiful and amazing ceiling of this building represents the art and taste of Portuguese architects. More interesting than the roof of this church, its columns are inspired by the architectural style of the area (Islamic architecture) as palm trees and three green and white and red (only the coral colors available throughout the island).

With the first rain after the castle was built, its inhabitants noticed the roof dripping and penetration of water from the coral roof. Similarly, they changed the church to the Abanbar, and, inspired by this, built another water reservoir.

Shortly thereafter, the huge storage water was laid with valleys in the seawater, which was used to provide fortress water. In addition to the church and the waterfall, there are several rooms, storage rooms, jails and black holes in the castle, decorated with the tastes found in the castle and fishing nets and other fishing tackles and harbors. 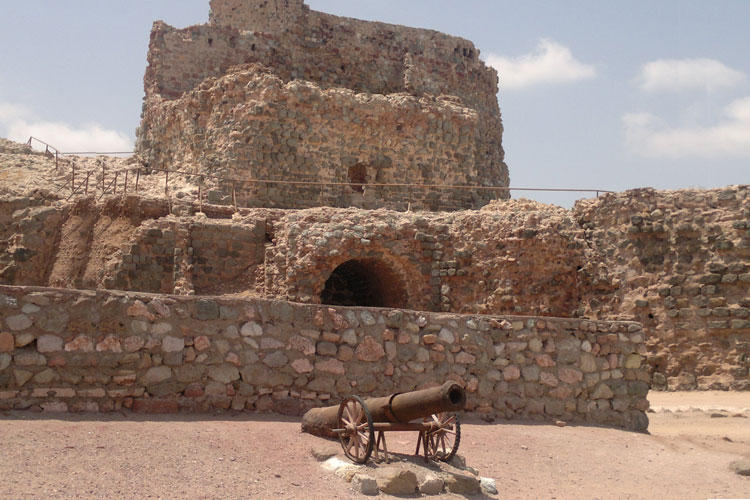 The collapsed walls of this castle give you the opportunity to see the beautiful scenery of the countryside and the mountains surrounded by the sea from the castle. The strange silence of this castle provides the best place to dive in the history of several centuries of the island.

The entrance rate approved for this castle is 2 thousand tomans, although it is usually unguarded, however, it is very worthwhile to find the guide that has the keys to the towers and the Abanbar castle.

The small village of Hormoz is unbelievable, so that nothing else but roaming in its popular bends can be done. At the northern point of the village is the small mosque of Imam Shafi’i community. There is no place to stay for travelers on Hormuz Island. But you may see the young people who have tent on the beach.

According to Guide Iran, it is interesting to know that there is only one sandwich restaurant on the island and the other option is the use of home-made dishes. So call those who offer these services, order your meals, and wait for them to be prepared, then go to the native home and eat your food. A few small shops and shops are located along the port to the castle, selling water, drink, biscuits and ice cream.

On the sea route of Qeshm to Hormuz Island, there are colorful mountains, among which there is a red mountain with an edible soil called Golak, and the indigenous people from its red soil as a spice in the cooking of fish and bread and pickles, jam And sauces. The mountain is about 200 meters high in the south of the island of Hormuz and is also used in the ceramic and painting industries. 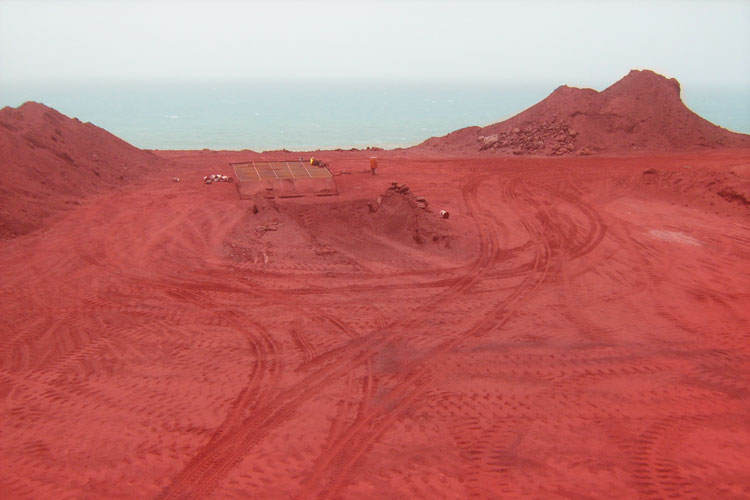 The only way to reach Hormuz Island is by boat trip (at a cost of 10,000 Tomans and a maximum of 30 minutes) from Bandar Abbas Harbor. Except for the winter season, Hormoz has a heavy heat and you can rarely find shade in it. So start your journey as close to dawn as you can. As soon as they are full, the boats move to the island almost every 15 minutes. The last boat returning from the island to Bandar Abbas is at 4 o’clock in the evening, however, accurate information on the boat’s movement before you go to the island from Joya’s pier. If you are interested in seeing other parts of the island, you can ask one of the locals to take you motorcycle to different parts of the island or visit the island’s boat. If you choose the second way, take care of the tide of the sea, tell the police before traveling and bring you water and food a day and a half.

Dear readers of GuideIran, we ask that if you have photos and information about this area, talk to GuideIran Website to help us know more about Iran. Portugal’s rule over the island in 1507, the Admiral and the founder of the zeal of the Portuguese Empire, Alfuso De Albercorque (known as Alfenoso the Great), surrounded the island of Hormuz to increase the influence of his empire in the Asian region. In the same year he ordered the construction of a fortress that was completed in 1515. With the occupation of Hormuz and the building of strong fortresses in it, Portugal quickly became the dominant power of the Gulf. Almost all Indian, Far East and Oman trade was controlled by the ports of the Persian Gulf through the island of Hormuz, and for the whole of the century, all was dominated by the Portuguese. But this Portuguese ouster led Iran and other emerging powers to anger. In 1550, the Ottoman navy seized the island for one month, but eventually failed to occupy the island. In 1600 AD, Safavid Shah Abbas handed over the trade mark of the port of Jask to the British Indian Oceanic Company, and thus the monopoly of the Portuguese trade was broken. In 1622, Shaabbas, which had no navy, prevented the British from engaging in silk trade, Forcing them to send their naval forces to release the island of Hormuz with the help of the Iranian army. The Portuguese defeated the island, but eventually failed and forced to leave the island.

Some cases in Iran that are strange for foreign tourists

A walk through the old pastry shops of downtown Tehran