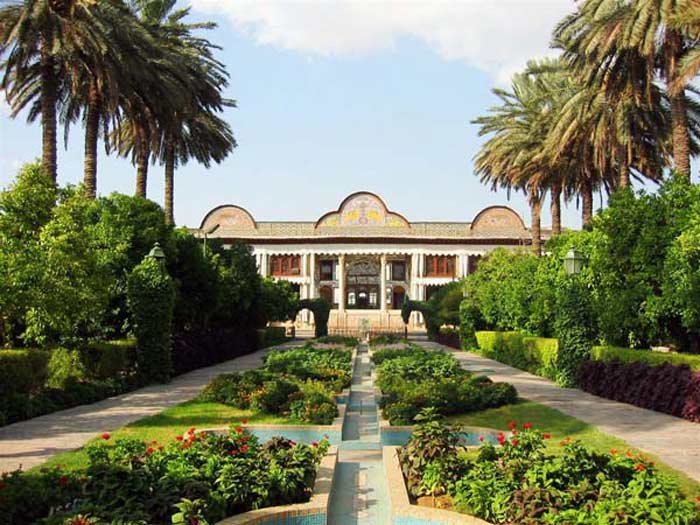 Shiraz can be called the most important city of Iran in the field of tourism. The old town, with its unique historical, literary, and atmospheric weather, is well-placed to host tourists even in the cold season. There are so many attractions in the city that all of them are not included in an article.
Shiraz is a city of poetry and perfume. It’s a lot of time because of the many historical monuments in the city.
Shiraz is one of the popular tourist destinations for domestic and foreign tourists. In May, the city will be transformed into a paradise with its spring blossoms.

In addition to all the attractions of this city, people are also factors that, due to the hospitality and hospitality of the tourists, are interested in tourists to travel to this city repeatedly. In this article, we introduce the city’s spectacles.
Hafez tomb
The name of Shiraz is associated with literature. Hafizia, or Hafiz’s Tomb in the north of the city of Shiraz and south of the gates of the Quran, is located in one of the cemeteries in Shiraz called “Mosalli”. This place is Hafez lovers hometown. The area of ​​this place is about 2 hectares, and its scenes are separated by a tunnel. The Hafezia Hall dates back to the Zandiyan period, which is 56 meters long and 8 meters wide, and has 20 stone pillars, each with a height of 5 meters.

The architecture of this place is in the style of the Achaemenid and Zendian architecture. Apart from the tomb of Hafiz, the surroundings of this place are full of gardens and tall trees that have added to its attractiveness. This building has been completed over the years and has been renovated several times. 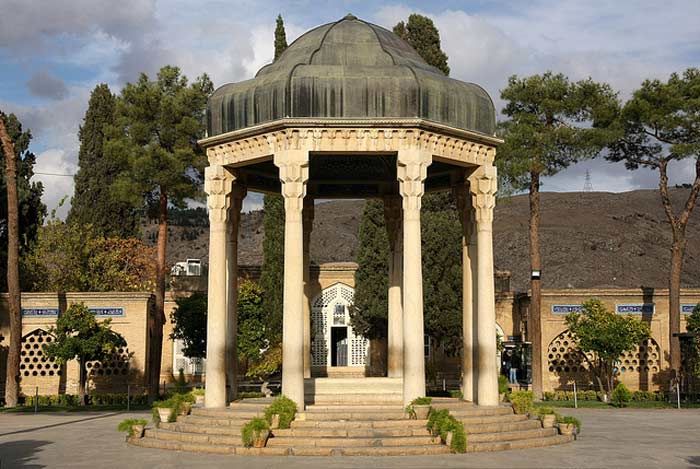 Saady tomb
Tomb of Saadi is another historical and literary attraction of the city of poetry. The moderator of this precious poet is located at the end of Bustan Street and near the Delgosha Garden. Some other elders have been buried around this tomb, according to their will.

This tomb was registered on November 20, 1353 at No. 1010/3 in national monuments of Iran. This place was originally the Saadi Monastery and he spent his late years there. Karim Khan Zende ordered to build a building in Saadi’s tomb. After a while, a masonry was built on the tomb and some repairs were made on it. The present structure of this tomb was built in 1330 and its main infrastructure is 258 square meters. 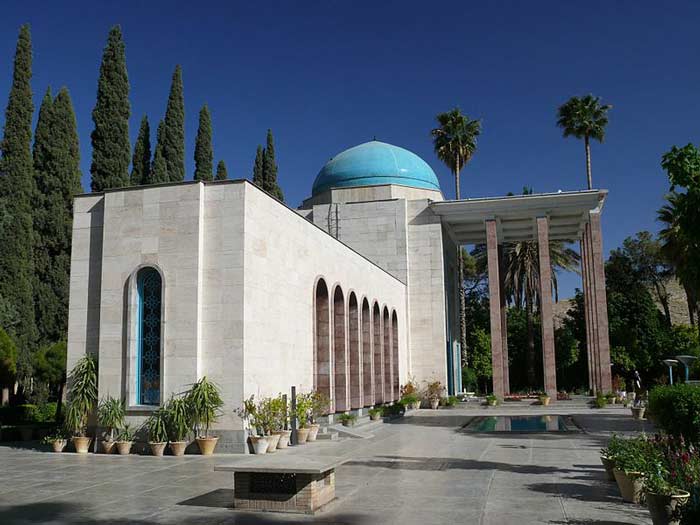 Shahcheragh shrine
Shiraz hosts Mir Seyyed Ahmad, the son of Imam Musa Kazem, brother of Imam Reza (AS), known as Shah Cheragh. The Shah-Kargai shrine was built in the 6th century AH and during the Atabokan era of Fars, but later it was destroyed in the Shiraz earthquake and the people began to build the barracks again.

The people of Shiraz are dedicated to this tomb and they come to the shrine of Shahghghgh to take pilgrimage and take possession of it.

The dome and vault of this shrine are covered with beautiful tiles, mirroring, and a variety of beautiful Arabic and Persian lines. Via 2, in the south and north of the shrine, you can enter the main courtyard of the shrine and see the dock and the trees surrounding it, which has given Safa a courtyard. Two in the subway are also open to the Hajji market and the Aqiq mosque. Shahkheri shrine is located near Shahid Ahmadi Square. 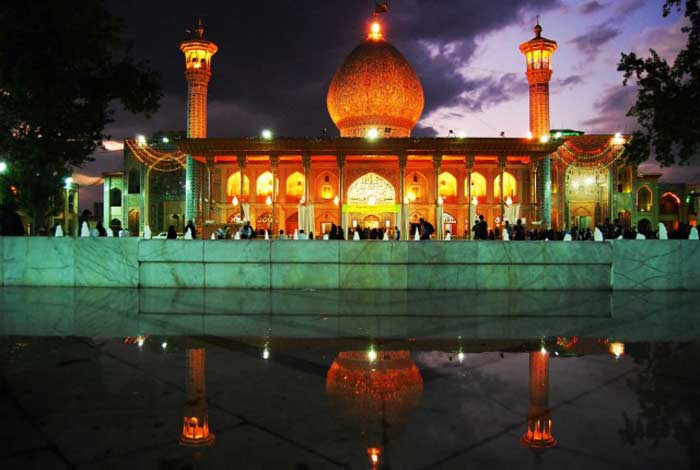 Quran Gate
The Quran’s gate of Shiraz is another historical attraction of this city, which few people find do not know. The gate of the Qur’an is located in the northeast of Shiraz, between the two mountains of forty officials and Babakovy. This gate is in fact the output of Shiraz towards Marvdasht. Near the gate of the Quran, several famous attractions in Shiraz are located like the Khajavi Kermani tomb, Jahan-e-Asnah Garden and Hafezia.

The gates of the Qur’an were built during the era of the Aqd al-Dawlah Deylami, and placed the Quran on it, so that those who leave the city could pass through the Qur’an. Karim Khan Zand rebuilt this gate and placed two covers of the Qur’an above the room on which it was built. These Qur’ans are known as the “Quran of the Seventeen I” and are now kept in the Pars Museum.

During the first Pahlavi era, the old gate of the Quran was destroyed by the order of Reza Shah, and in 1328 a new gate was built a little bit from the old gate. The new gate is larger than the previous gate. 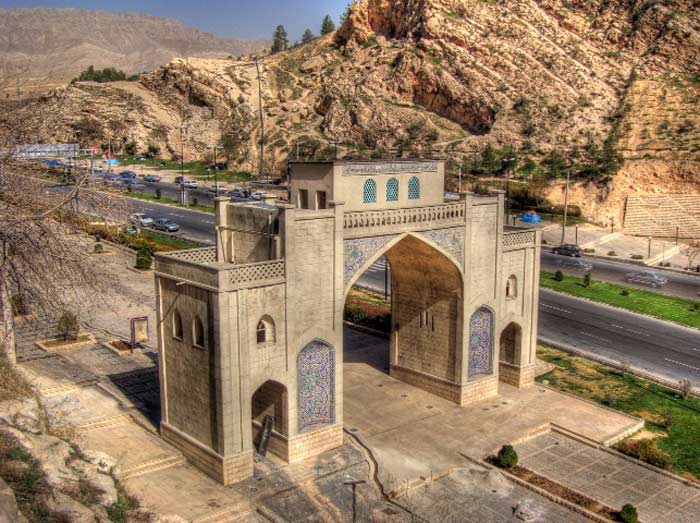 Another famous poet who was buried in Shiraz attractions is Khajavi Kermani. His tomb is located north of the city of Shiraz attractions, at the beginning of the Shiraz-Isfahan road, Tangollah Akbar and on the slopes of Mount Sobu. This tomb has a beautiful view over the gate of the Qur’an, and the water of the fountain of springs passes through the tomb, giving it a very beautiful front.

In 1315, the Khajavi Kermani Tomb was built with the dedication and credentials of the Fars provincial culture administration. It is not built on a tombstone, and the gravestone has a tumultuous state. In 1337, a room was built in the northern part of the tomb, which has become the Khajavi Kermani Cultural Center today. The tomb of Khajavi Kermani, number 916, has been registered on the National Iranian Book List. 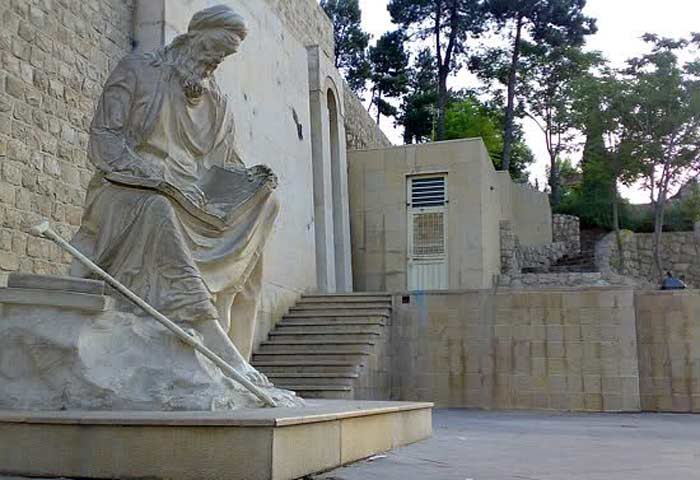 The garden of Narendjane Qavam is known as the Garden of Qavam, and was built under the rule of Nasir al-Din Shah, by the command of Ali Mohammad Khan (Qawam Al-Malik II). The area of ​​this garden is 3500 square meters and has a basement of about 940 square meters.

On the south side there is a chamber that opens to the vestibule and leads through the two corridors leading you towards the courtyard.

shiraz attractions On the south side, the crew lived, and the north side of the building, with a basement and two floors on it, the residence of its owners, the formalities and reception of guests. This building has mirrors, marble columns, royal palaces and several other rooms, with mirroring, glazing, carving, carving, plastering, plastering and plating.

In 1335, the Garden of Narenjestan was donated to the University of Shiraz attractions, and today it is used as a museum. Nuristan Qavam Garden in the neighborhood